Acts 17:2 Ministries is very proud to endorse Christ Alive Care Ministries. First, in their own words: 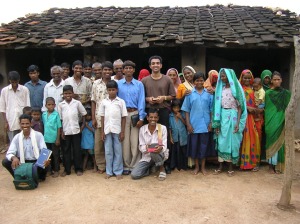 Welcome to Christ Alive Care Ministry’s Website. We hope the information available to you will be helpful and that you will be motivated to keep us in your prayers as we circle the communities with the Love of Jesus Christ. Founded by Rev. Wilson Varkey and Pastor V.U. Varghese, the ministry has been consistently dedicated to sharing the Good News of the Gospel in the Indian villages and exerting valuble services to the orphans and poor in the community.

The goal of the organization is to do its part in fulfilling the Great Commission of our Lord and Savior Jesus Christ: to “Go into all the world and preach the gospel to every creature.” Also the ministry is dedicated to serve the poor in the community by rendering their requirements and fostering the helpless. We are registered in India as a non-profit, charitable organization and are now partners with Touch The World Ministries based out of Morganton, North Carolina in our child sponsorship program. Our main focus is building partnerships with local and international churches for the recruitment of faithful brothers and sisters who have a desire to reach the unreached and come work with us in village outreach where we do open air evangelism. We wish to offer you and your church the oppurtunity to be a part of these Great Commission works and invite you to contact us regarding how you can show Christ to others and share with them the love and plan of salvation.

I discovered the ministry through my friendship with Adam McNutt, who serves as their director of North American operations. I have always believed in the importance of missions, even if God has not called me to personally go and serve in another nation. Yet I am convinced, if not by anything more than my own experience, that people are more effective at sharing their faith in their own cultures. I am certainly in favor of sending missionaries to foreign lands! Yet over and over again, we have found native missionaries can do in a few weeks or months what foreign missionaries may have to spend years, or even a lifetime, accomplishing. If you don’t think so, just imagine how much more uncomfortable you would be around, say, a Buddhist from another country, dressed in traditional Buddhist garb, trying to tell you about the benefits of Buddhism, as opposed to if someone from your own town were to have that same conversation with you!

When you support CACM, you are supporting local, native missions. These are people who have a deep desire to reach their own, and if Western Christians can provide them the financial means to do so, I think God expects no less!

But further, please specifically pray about sponsoring a child. Before we say anymore about that, take a few minutes and watch this brief video (not produced by CACM) that presents, I think, a fantastic strategy to fulfilling the Great Commission:

Why has the Church spent so little time on child evangelism? If we can reach children for Christ in areas that are not Christian, they can tell their friends about Him, and a whole generation can grow up to become native evangelists!

You can sponsor a child for as little as $15 per month. Further, because we believe in the ministry of CACM so much, we are offering a free copy of our twelve week course (complete with twelve MP3 commentaries!) To Give A Reason For Our Hope to anyone who sponsors a child, PLUS two free months of membership in our private correspondence program (normally $30 per month).

Please go to their website now and consider sponsoring a child. Tell a friend (or two), and share some of the blessings God has given you with the “least” of His children.

[H]asn’t there been actual physical evidence to prove the story of Lot’s wife being turned to salt?

This is, unfortunately, one of those stories that gets repeated a lot (pun intended) without people doing much fact-checking. Sodom and Gomorrah, which God destroyed for their wickedness (see Gen. 19), were near the Dead Sea. As it happens, there is a rock formation that looks like a woman looking behind her, and that formation has been called “Lot’s Wife.”

There are reasons, however, to reject the claim that this is actually the woman whom God turned into salt for disobeying Him. The most obvious is that the rock is simply much larger than any human being. The second is that there is no reason to believe that a rock formation in the shape of a human would have survived thousands of years, and even if it did, it is less likely that it would still look like a person all these years later.

Apparently, such rock formations, from small to large, are not uncommon in that area. It’s certainly possible that one of them could be Lot’s wife, but it would be impossible to identify which one it would be.

While we’re on the subject of Lot’s wife, though, I would like to point out one more common misunderstanding. Gen. 19:26 says, “But Lot’s wife looked back, and she became a pillar of salt.” Most people argue that she “looked back” because she longed for her life back in Sodom, and that is the real reason for her judgment. Such an idea is certainly consistent with the rest of Scripture. James 4:4 says that to be friends with the world is to be enemies with God. But I think a closer examination of the passage teaches a much deeper lesson.

Lot took his wife and two unmarried daughters with him (Gen. 19:15), and most people just assume that these were the only children Lot had. Yet the same story also says that Lot tried to warn his sons-in-law, but they thought he was joking (Gen. 19:14). That means that Lot had other daughters who were married, which means it is still further possible that he had grandchildren. So why did Lot’s wife turn back? It is certainly possible that she may have longed for her life in Sodom, but try to put yourself in her shoes just a moment. It was not just her home and social life that was being destroyed. She had children and possibly grandchildren still in the city. Her emotional devastation at losing them clouded her judgment.

There is a direct correlation in the New Testament to this. Jesus said in Luke 14:25-27,

God demands absolute love for Him. Few Christians appreciate just how radical this really is. It is easy to say that we should love God more than our families when our families are, with us, striving to please God. But what happens when following Him puts us at odds with them? Christians throughout the centuries have learned the hard way that sometimes they have to choose between Him and their loved ones. Lot’s wife experienced just such a choice. Would she obey God, or would she disobey Him for the sake of her family? Her sin was not that she loved her children so dearly. It was that she chose them over the will of God.

There is a lot that we can learn from her story. Whether or not we ever find her physical remains, her judgment stands in our mind as a firm reminder of the dedication God requires from His children.

One of the most common charges atheists make is that the concept of God is incoherent, that is, that is contradicts itself. For example, a married bachelor is incoherent because the two terms are mutually exclusive. If I am married, I can’t be a bachelor, and if I’m a bachelor then I can’t be married. That is a simple example of incoherence, but others are very complicated. For instance, it is common to hear politicians accusing one another of being incoherent. Recent examples in American politics include Democrats accusing Republicans of worrying about deficits while blocking tax-increases and Republicans accusing Democrats of being for the lower and middle class while both blocking energy policies that would decrease gas prices (i.e., off-shore drilling) and simultaneously proposing policies that would increase them (i.e., “cap and trade”). If a position is incoherent, it can’t really be true.

Arguments about whether or not “God” is a coherent term run from very simple to very sophisticated. The simplest of these is to ask questions such as, “Can God create a rock so big He can’t lift it?” The implication is that if God is able to do anything, then He should be able to create such a rock. Yet if He does, then He would not be able to lift it, which would mean that He wasn’t really able to do anything. Or some may ask, “Can God remember a time He didn’t exist?” to imply that God is either omnipotent or omniscient, but He can’t be both.

These types of questions focus on God’s omnipotence by defining it as “the ability to do anything.” It is important to acknowledge here that, in one sense, the critic is right. There are some things that God cannot do. Many Christians have been tempted to respond by saying, “No, God’s omnipotence just means that He can do anything that can be done.” On the one hand, technically, they are correct, but it leaves them open to rendering God impotent. For instance, this may allow someone to say, “Well, God can’t do miracles, because miracles aren’t things that can be done.” If we accept the fact that miracles are impossible, then the statement must be true, but a God that cannot do miracles hardly seems worthy of being called God, and, in any case, is not the God of the Bible.

It is better to maintain the definition of omnipotence as “the ability to do anything” and insist that we are actually talking about any thing. Incoherent concepts themselves aren’t really things, because self-contradictory things aren’t real. Married bachelors can’t possibly exist, so it is meaningless to talk about them. The “idea” turns out not to be an idea at all. We can’t ask God to make a married bachelor, because God can do anything, but married bachelors aren’t things.

In other words, omnipotence means that God can do anything that actually has meaning.

Self-contradictory ideas like a rock so big that an omnipotent being can’t lift it are self-contradictory and thus have no meaning. They may sound like they mean something, but actually they are just words strung together. Even God cannot violate the law of non-contradiction, not because He is under that law, but because that law derives its meaning from what God already is. God is One. God Himself does not be and not be at the same time, and since everything gets its being from Him, then nothing in the universe can both be and not be at the same time. To say that anything does is meaningless, and so to ask god to do anything that violates the law of non-contradiction is meaningless.

There are serious debates that can be had about the coherence of the God-concept. Silly questions like “Can God create a rock so big He can’t lift it?” isn’t an example of one.